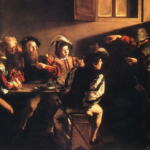 Caravagigo’s ‘The Call of St Matthew’ 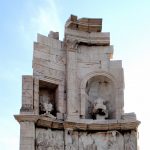 From the National Galleries of Scotland, In 1799 Lusieri was employed by Thomas Bruce, 7th Earl of Elgin, as his resident artist and agent in Athens, where he remained until his death. Lusieri was closely involved in supervising the removal…

The Deacon of Dark River is a classic Icelandic folktale, which is often the subject of painting and poetry.

Come, Desire of Nations, come,
Fix in Us thy humble Home,
Rise, the Woman’s Conqu’ring Seed,
Bruise in Us the Serpent’s Head.

Now display thy saving Pow’r,
Ruin’d Nature now restore,
Now in Mystic Union join
Thine to Ours, and Ours to Thine.

This is the fourth stanza from Charles Wesley’s original 1739 version of “Hark! the Herald Angels Sing” (originally entitled “A Hymn for Christmas Day”). It’s wonderful. I wonder why it’s not included in the song much anymore.