The Means of Faith

Wesley Hill’s essay this morning in the Los Angeles Review of Books is troubling for the reality it exposes. Hill begins by relating a story from his college days when a classmate was in agony over her salvation status as a result of studying Jonathan Edwards. In contrast, another classmate who simultaneously studied Edwards, was about to be confirmed in the Roman Catholic Church, and Hill asked him why.

My friend was slow in replying. ‘When I was an evangelical,’ he finally said, ‘I was always wondering whether I was doing enough. Or whether I was studying enough—had figured out the Bible well enough—or praying enough. I felt that I had to sort out my theology and gauge whether I was ‘spiritual’ enough. But, being Catholic, I don’t have to figure anything out. I trust the Church to offer salvation. Communion is the body and blood of Christ, and when I receive it, I know I’m receiving grace.’

When the Roman Catholic Church’s practices offer assurances of grace and evangelical culture does not, something has gone terribly wrong. Hill is commending Philip Cary’s book on the subject, Good News for Anxious Christians, and argues that Protestants can recapture this calm through liturgical and sacramental practices. He’s right: too often evangelicals look inwardly for their own assurance of salvation, when the gospel is that Jesus is our assurance of salvation. When experience rather than the work of Christ becomes the ground of assurance, anxiety (or pride) is all that remains. The worship of the church, at least in its historic forms, was designed to root people in doxological encounter with Jesus; recovering that is recovering faith in Jesus instead of pressing for faith in faith.

Update on the Redemption Creed

I finished the prior version of the creed in January, 2018. I was mostly content with its doctrine and organization, but was advised that it was too long (it was about 240 words and 326 syllables, compared to 220/290 for the Nicene Creed and 110/160 for the Apostles’ Creed, respectively). I took over a year off from editing it in order to gain better perspective, and it is now much smaller, compact, and effective.

I solicited a lot of feedback in the drafting process, which was quite interesting. A number of people (mostly Anglicans) thought it was an attempted usurpation of the ecumenical creeds, which was not my intent. Quite a few people (mostly Reformed) thought that it needed more information or emphases on different aspects of redemption. That would be nice, but it was ballooning into something unwieldy. One of the interesting differences between the Nicene and Apostles’ creeds is the precision of the former; you can’t defend historic Trinitarian orthodoxy from explicit statements in the Apostles’ Creed the way you can from the Nicene. Yet, the Apostles’ Creed is orthodox and provides a creedal foundation for catholic Trinitarianism. There are “hooks” within the Apostles’ Creed that draw people to the more explicit formulations of the Nicene, Athanasian, and Chalcedonian creeds. In the end, that was the model I decided to follow for the Redemption Creed. Prioritize accuracy in what is there, emphasize Reformational soteriology, and make it usable. It is not a substitute for either the ecumenical creeds or the Reformed confessions and catechisms, but hopefully a valuable, liturgical supplement.

On the Purpose of Benedictions

What’s the point of the pronouncement at the end of worship of God’s blessing? And why does the pastor raise his hands when making it? One of the most important principles of worship is that God has decided how he is to be worshipped. So a third question must be, Where do we find a biblical warrant for this element of worship?

This final part of the worship service is called the ‘benediction’, which comes from the Latin word for blessing, ‘benedictus’. For example, Zechariah in Luke 1:68-79 pronounces a prophecy that begins with, “Blessed be the Lord God of Israel.” This prophecy is known as the Benedictus…

A Brief Guide to the Redemption Creed

A common pastoral struggle is the work of reminding Christians that they rest upon Christ and his finished work alone for their assurance of salvation. The necessity of regularly preaching the gospel partially flows from a sin-induced, immature forgetfulness. The child of God forgets, or doubts, why the Father has adopted them into his family. A nagging pride can leave some convinced that they merited their salvation. Or fear can convince the Christian that Jesus’ work was not enough, and that there needs to be more: more faithfulness, less sin, on the Christian’s part, in order to be accepted. Sometimes sheer ignorance, or confusion, is the source of the error… 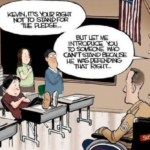 On the Civil Religion and Kneeling

If you think that when Neo-Nazis and the KKK protested in Charlottesville, with a white supremacist murdering and injuring counter-protestors, that there were “some very fine people on both sides,” that this represents an insignificant fringe of American culture, and that media blew it out of proportion,

But also believe that black men kneeling during the national anthem to protest racism directed at their community is hugely disrespectful, and that they should be fired, you are probably racist.

If you think efforts to remove flags and monuments to the Confederate rebellion to preserve slavery, most of which were erected during the Civil Rights era, is a liberal assault upon American heritage, and that they should be left up…