One More Time: Evangelicals and Presbyterians

In Ordained Servant, Darryl Hart has a review up of Reformed & Evangelical Across Four Centuries: The Presbyterian Story in America. I wrote about this book back in July, and both used and anticipated Hart’s assessments brought to bear in his review.

One of Hart’s criticisms is that the authors neglect the non-liberal, non-evangelical Presbyterian tradition, with the specific example of ignoring J. Gresham Machen but focusing on Harold Ockenga. I’m sympathetic to this criticism, and count myself as descending from the legacy of Machen. But I suspect that the confessionalist, non-evangelical wing of American Presbyterianism overestimates its importance. The OPC split from the PCUSA in 1936, but by the time the PCUSA merged with the UPCNA in 1958, the mainline denomination had 2.7 million members with the UPCNA having about 257,000. The OPC had about 10,000 in 1958; it’s 32,000 today. Hart cites two other denominations, the ARP and RPCNA, as lacking consideration. The RPCNA had a membership of 6,000 in 1958 and about 7,000 today. I can’t find the 20th century numbers for the ARP, but its current membership is about 22,000.

In other words, the non-liberal, non-evangelical denominations whose story that Hart wished was being acknowledged appear insignificant to the overall history of American Presbyterianism unless you happen to already belong to them…

I previously uploaded my version of the American Presbyterian & Reformed Churches family tree, and decided to do the same for the Netherlands. I was unsatisfied with the Dutch tree I had found, and my growing interest in Dutch church history and its intersection with the American Reformed scene led me to create this (high quality link here). The tree is less busy than its American counterpart, but still interesting. One day I’ll do one for Scotland and England.

We were required to read John Frame’s “Machen’s Warrior Children” in seminary. It was intended to be a warning against denominational quarrelsomeness, but had the effect of puffing us up: We’re charitable, winsome Presbyterians, not like these other petty “Truly” Reformed types who make everything a battle. Rereading the article, it is pretty clear that the most common denominator and antagonist in these debates is not Machen’s Warrior Children, but John Frame. Doctor, heal thyself.

Book Review on ‘Reparations’ up at Mere Orthodoxy

My book review of Duke Kwon and Greg Thompson’s Reparations: A Call for Repentance and Repair is up at Mere Orthodoxy. Kwon and Thompson make the case that White churches owe African Americans reparations. I expect that their work will be a starting point for a lot of reparation discussions in Presbyterian circles in the near future. The book was compelling, but overreached. Here’s an excerpt of my reivew,

I was persuaded of the biblical arguments for reparations before reading Kwon and Thompson, and their work only strengthened that conviction. But the application of that biblical principle into the life of the church? My church, where I pastor? The duty of Christian love and sacrifice in working towards repair does not go away if fault is cleared, but the bedrock of Kwon and Thompson’s argument is that reparations is the complicit returning what was stolen. It is not ethical bean counting or an evasion of loving obligation to take that aspect of their argument seriously and then to assess its claims of historical moral responsibility for my congregation. 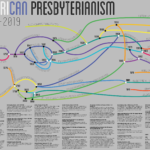 This newer chart of American Presbyterian denominations is more visually pleasing than the one I had made, though it is not as thorough. It’s still a great chart.