I have a new article at Mere Orthodoxy. I really wanted to use “weltschmerz“, but it was probably too pretentious. Here’s an excerpt.

Spiritual depression is a melancholy disquiet of the soul, alternating between angst and stupor, that affects the souls of people and nations. A cause that Lloyd-Jones catalogs here is the utilitarian approach to the Christian faith, of valuing Christ’s kingdom as a means to an end. Now, of course no American church or Christian would ever say such a thing. Instead they will talk about the relevance and application of the gospel to their lives: what good is God to me and my interests? This is the way of spiritual depression.

The American church at this moment is in something of a spiritual malaise. This is nothing new; Lloyd-Jones preaching in 1960s London was no stranger to those whose interest in Christianity was focused on its worldview and its applications. There have always been those who view the faith pragmatically and have pressured their leaders and flocks to emphasize the usefulness of the religion. Yet, there is a particularly sharp uptick in the American church of those who see the church’s role as speaking prophetically (that is, mimicking the talking points of political parties with the same level of decorum) to faddish issues and the pressing concerns of that particular congregation’s constituency.

Our debates, discussions, splits and schisms, our tribal identities are being driven by differences over the utility of the gospel.

Christians Need To Be Evangelized, Too

I had the privilege to present on the subject of evangelism during a lunch session at this summer’s EPC General Assembly. My talk was sponsored by the Westminster Theological Society, which was an honor. Unfortunately, I’m a technological doofus and failed to hit the right button on my mic to record the talk. Below is a rough paraphrase of my talk: “Christians Need To Be Evangelized, Too”. I started my talk by reading Isaiah 60:1-6.

To be evangelized, eugelizoed, is to be gospeled. To evangelize is do the working of gospeling. There is a need to do this for Christians, and not just because of the volume of ignorance in our churches. There would be nothing more disheartening for a pastor than to survey his congregation with the question “What is the gospel?” and read the results. Those of us who have done officer interviews and ask this question have far too been dismayed as we are met with answers focusing on personal experience, transformation, and comfort, not the affirmation that the gospel is the good news that Jesus is king and that he has inaugurated his kingdom through his death and resurrection…

Since I wrote on James’ article on First Things there’s been some additional commentary, which I think deserves a response.

Tim Keller has never applied his “third way” towards partisan politics as such, but to the essence of church fellowship. This article on the whole brouhaha by Brian Mattson is good, but misses what Keller is doing:

Keller absolutely affirms that abortion is a great evil—he is a conservative Presbyterian pastor, after all. But then he follows up with the idea that the best way to reduce abortion isn’t exactly clear, and maybe the left has ideas as good as those on the right. This is where the missing priorities problem is at its greatest. If it is a great evil, if it is the unjust taking of human life, at the very least it should be illegal. At the least.

Except, as I pointed out in my last post, Keller very strongly and publicly opposes legal abortion. He even publicly committed to civil disobedience if compelled to support it! Keller is saying that those who adopt different political strategies for addressing abortion (or pick your political topic) than him should not be barred or cast out of church. That’s what his recent tweet thread was about, that’s what his articles that James and Mattson cite are about.

That’s what makes James’ followup so frustrating: “I am largely concerned about the way [Keller’s] framework is broadly appropriated by his disciples, many of whom populate leadership positions in churches and other Christian ministries.” He should have said that in his first essay. James is at pains to say he appreciates Keller, even his approach, but thinks a) inadequate Keller’s winsomeness applied to politics and b) inappropriate the way Keller’s framework has been misused by his disciples. Then say that. Writing an article about how he has moved on from Keller, rather than one about how Keller has been misapplied and there needs to be a recalibration, strikes me as unfortunately cynical.

A Continued Appreciation for Tim Keller

James Wood’s First Things article, “How I Evolved on Tim Keller” has prompted a significant response from a variety of quarters. He struck a nerve and resonated with a number of people. James and I were in the same graduating class at Redeemer Seminary and shared similar church backgrounds at the time, as he detailed in his essay. Our school also prominently advertised that we were the first to teach a class built around Keller’s then-recently published Center Church – one of the few gimmicky moments in my education. So I have an appreciation for where James is coming from.

But I think he misread Keller in the neutral world and Keller now. I have my differences with Keller, but he is still a man to be appreciated for this season… 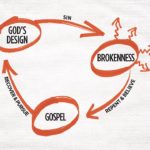 A Review of “Three Circles”

Turning Everyday Conversations into Gospel Conversations (Three Circles) by Jimmy Scroggins and Steve Wright has become a favorite evangelistic tool in Baptist circles. The North American Mission Board (the domestic mission arm of the Southern Baptist Convention) has adopted it and even created a companion website and app.

Scroggins and Wright are motivated to share the gospel with as many people as possible, and to equip the people of the church to this. A laudable motivation, to be sure. Thy are driven by a desire to see a multiplying church, especially in their unchurched South Florida context.

Now, a word needs to be said about whether South Florida (the authors are in West Palm Beach) is unchurched. They assert that 96% of the 1.4 million people in Florida are unreached and that West Palm Beach is an unreached city (pg. 17), something that is repeated regularly throughout the book. This, to put it bluntly, is inaccurate. The 96% unreached number comes from NAMB, which provides no data to back up their claim. Yes, the cited 2015 Barna data says that West Palm Beach is the city with the highest percentage of “never-churched” people in the United States (17%), but that means 83% of West Palm Beach has been churched at one time. That very same Barna report states that West Palm Beach is currently 52% churched, 48% unchurched, the 11th least-churched city in the country, but hardly unchurched or unreached. The Association of Religious Data states that in 2010 (most recent year for their data) Palm Beach County had a rate of 36.6% regular attending Christian adherents, with 10.9% of the population regularly attending an Evangelical Protestant church. No matter how you massage the numbers, South Florida is not unreached. That does not mean that sharing the gospel should be a lower priority, but that does mean Scroggins and Wright made me skeptical of their work. Misleading the reader on one point, intentionally or through unintentional sloppiness, means you’re untrustworthy on the others. When so much of the book’s argument is validated by the alleged effectiveness of the tool in converting the unreached, but it turns out the number of unreached is inaccurate, it calls into question the effectiveness of the tool and validity of the book’s argument…